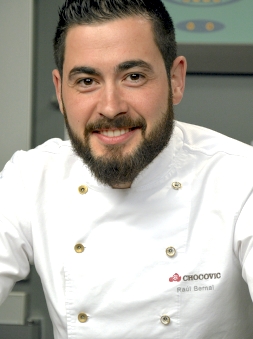 Raúl Bernal (Huesca, 1983) happened to stumble upon the world of pastry by chance. Yet, surprisingly he became the man to revolutionize the world of chocolate figures, his greatest passion. This grand master shows his style in all his creations, both artistic and of great technical skill. In addition, he is the creator of the most innovative techniques for making chocolate figures, equally acclaimed and imitated by prestigious professionals in the field.

At just 16 years old, he landed his first job at a bakery, from which he jumped to many others, until he decided to study at the Pastry Guild School in Barcelona. Later, Raúl began studying under David Inglada (Best Restaurant Pastry Chef 2004 by LMG) at the time, the director of the Solé Graells Classroom. Since then, he has participated in numerous fairs and congresses, performing technical pastry demonstrations in front of professional audiences, which led him to the opportunity to attend events with prestigious professionals such as Carles Mampel, Oriol Balaguer and Philippe Urraca. We can no longer call him a novice, since he has given more than enough signs that his professional progression has no limits.

His participation in the contest for the Best Master Chocolatier of Spain 2008 earned him the signing of the company Choc&Chic, as head of R&D, which specializes in chocolate. In 2009, he achieved a brilliant third place in the International Chocolate Figures Contest organized annually by the Barcelona Pastry Guild and -in the same year- he won the title of Runner-up in the Spanish Chocolate Cup and became part of the staff of teachers of the Pastry School of the Guild of Barcelona. He is also the winner of the Lluís Santapau 2011 trophy (best master chocolatier in Spain),  and is a professor at the Chocolate Academy, a pastry chef at Chocovic and member of the 21 Brix Collective.

In 2022, he won the Best Tea Pasta award in Aragon and is now third in all of Spain.