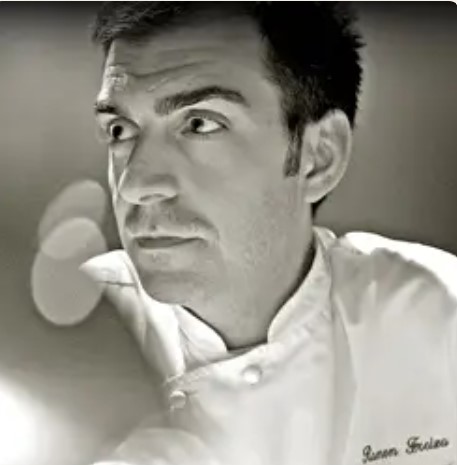 Ramón Freixa was born in the 70s. Despite his young age, he already knew intuitively his fate and he joined the Cooking School and Tourism (Escuela de Hostelería y Turismo) of Sant Pol de Mar (Barcelona, Spain). Eager to learn and make his passion grow, he travelled to Brussels to find out more about the secrets of the most innovative cooking back in that time, as well as the last techniques. He was also in France, where he discovered an entire world of plants and wild flowers which later proved his talent in the spring menus.

When he went back to Barcelona, Ramón Freixa joined the family restaurant ‘El Racó de’n Freixa’, and in 1998 he substituted his father and was in charge of the restaurant keeping the Michelin Star that it had possessed since 1988. Ramón was remarkable for is extremely personal cuisine, “perfectionist, innovative, daring and amusing”, which took tradition as its basis. He mastered the cooking techniques and was careful with the selection of products. With his imagination and creativity, he was capable of transmiting his passion to his clients.

In 2001 and 2007, the guide Gourmetour awarded him the prize Best Cook (Mejor Cocinero) and Best Spanish Restaurant (Mejor Restaurante de España); in 2002, he got the award the Best Trolley of Cheese (Mejor Carro de Quesos); and, in 2003, the award Best Offer of Desserts (Mejor Oferta de Postres).