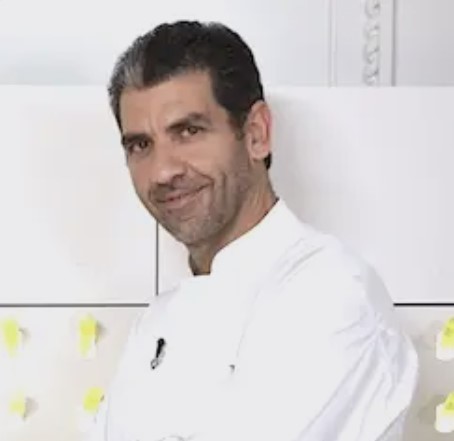 Paco Roncero studied at the Cooking and Tourism School (Escuela de Hostelería y Turismo) of Madrid and he did some internships in Zalacaín and at the Hotel Ritz until the moment he joined the staff of the ‘Casino de Madrid’ in 1991. He really succeeded in just a few years, becoming part of the leadership organisation in the Casino, including the management of the area of feasts and the restaurant ‘La Terraza del Casino’, under the management of NH Hoteles. At that time, his creative personality exploded and his virtues of creator meant a real revolution for the Casino and for the national cooking panorama. He was soon awarded the ‘Premio Chef L’Avenir 2005’ by the International Academy of Gastronomy and the ‘2006 National Gastronomy Award’ by the Spanish Royal Academy of Gastronoy (Real Academia de Gastronomía Española).

Paco Roncero's cuisine is the result of the skillful mastery of the most evolved cooking techniques, his boundless creativity, his curious spirit and his ability for innovation. His innate sensitivity and his style have resulted in important contributions to the international avant-garde cooking, as well as his 2 current Michelin Stars and the 3 ‘Soles’ of the Guía Repsol at the restaurant  ‘La Terraza del Casino’ of Madrid. He is the manager of the "gastrobars" ‘Estado Puro’, derived from a creative reinvention of a traditional Spanish bar of tapas. Also, he is the current gastronomic advisor of the restaurant “View 62 by Paco Roncero” in Hong Kong.

His latent inventive spirit  has led him to surpass the cooking  limits to start some projects, such as the creation of the software “Gestor de Cocina” (Cooking Manager) or the publication of his books ˝Tapas y Gastronomía del S. XXI” (Tapas and Gastronomy of the 20th century), “Bocadillos y Ensaladas” (Sandwiches and Salads) and  “Tapas en Estado Puro” (Pure Tapas). In addition, Paco Roncero has invented a unique scenario within the Casino de Madrid thanks to the latest technology in the design of environments and ambient intelligence. It is conceived for the creation of experiences and emotions in the gastronomic sphere as never before: ‘PacoRonceroTaller’, the workshop of emotions.