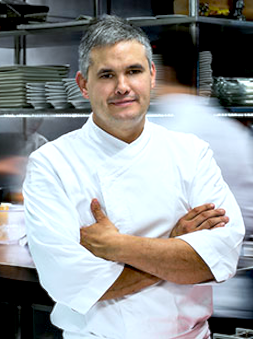 Owner and Chef at Can Jubany 1 Michelin Star (Barcelona, Spain)

Nandu Jubany was raised in the kitchen. At the age of 18, he was already working as head chef at Urbisol, the family restaurant. Later he worked in other great restaurants, such as the Cabo Mayor in Madrid or the Fonda Sala d’Olost in Lluçanes. In this first stage, he learned from renowned chefs such as Carles Gaig, Faust Terra, Juan Mari Arzak and Martín Berasategui.

In 1995, together with his wife Anna Orte, he decided to open his own restaurant, Can Jubany, a cosy farmhouse that has become a gastronomic benchmark. Three years later, the restaurant and its chef received a Michelin star.

In 2001 he opened a second restaurant in the heart of Montseny, Mas d’Osor, which today has become a hotspot for celebrations and events. In 2005, El Serrat del Figaró opened, in Taradell, another banquet and event room. In 2006, he inaugurated the Hotel Mas Albereda in Sany Julià de Vilatorta. In 2011, he joined Carles Gaig to promote a joint project: managing the “Orígens, Arrels and Sol i neu” restaurants of the Sport Hotel Hermitage & Spa in Andorra.

In 2014, the Repsol Guide awarded its highest gastronomic recognition in Spain to the Can Jubany restaurant with three Repsol Suns.

Nandu Jubany also participates in the “Science & Cooking” course at Harvard University in the United States, promoted by the Alicia Foundation, with a presentation on the preparation of emulsions and allioli.

His style is a surprising mix of tradition and modernity. His dishes result from a careful choice of the best products and inventiveness.