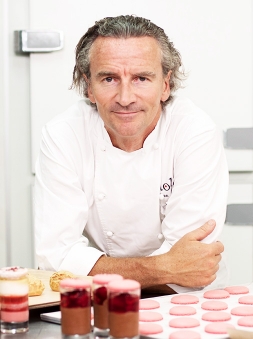 Yann Duytsche (Lille, 1967) is a chef who has always been clearly focused on dedicating himself to confectionery. He has been trained in great French schools, has worked in prestigious hotels and he has even taught. He is currently based in Sant Cugat del Vallès (Barcelona) in the Dolç gourmet pastry shop where he researches and works to create exclusive desserts.

Through the influence of his uncle, who ran a pastry shop, at age 9, Yann was fascinated by the creative capacity of this discipline. His talent proved him capable of advancing at a very young age, and at age 15, he entered the École Hôtelière du Touquet-Paris Plage. After he left here, he began training in large and often Michelin, hotels, such as the Grand Hotel Clément (Ardres).  This was followed by the most prestegious restaurant in Europe (Hôtel Fitz Roy), in the Alps, and the Hôtel Châteaux.

One of his referents, Roger Vergé del Molin de Mougin (3 Michelin stars), had a great influence on Yann. Yann worked as a pastry chef and discovered the sophistication of cooking, the Mediterranean and its gastronomy, the richness of Provençal cuisine, respect for flavours and the search for nuances. At the age of 25, he travelled to Barcelona and worked at the Baixas pastry shop, and then returned to France and worked at the best bakery in the French country, Daniel Giraud's. Later he joined Valhrona.

Having spent six years as a teacher in different pastry schools, Yann also has experience as a trainer. Similarly, the five years travelling around southern Europe, offering courses and advice, has given him power and influence in the culinary world.

Finally, he settled in Sant Cugat (Barcelona) and opened his own pastry shop where he returned to work like the child he once was, creating and experimenting in his uncle's pastry shop.

Yann is now the author of the book "A week with Yann" (Grupo Vilbo).