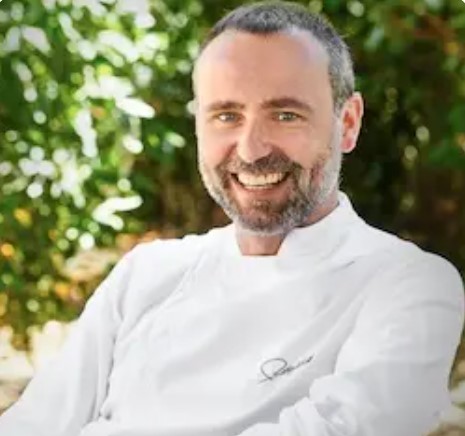 Rodrigo de la Calle was born surrounded by a kitchen and nature. Son of a farmer and grandson of cooks, he used to enjoy in nature since his childhood. He studied at the Cooking School (Escuela de Hostelería) of Aranjuez and he was hired as chef at the hotel Huerto del Cura after having finished. Once there, he became the executive chef. At that moment, De la Calle knew Santiago Orts, the botanist of the hotel garden, with whom he created the concept “Gastrobotánica”. He introduced different varieties of vegetables (until then unknown by a large part of cooks) in his dishes.

From that passion, he started to work with Andoni Aduriz, Paco Torreblanca, Quique Dacosta and even Martín Berasategui, this last one considered as his teacher and advisor by Rodrigo himself.

In 2007, Rodrigo de la Calle opened his restaurant, called after him, in Aranjuez. He later moved this restaurant to Madrid, where seasonal vegetable products are the protagonists and he carved his own cooking style out, based on the respect for nature. After being acclaimed as Breakout Cook (Cocinero Revelación) in Madrid Fusión in 2009, Cook of the Year (Cocinero del Año) in 2010, Chef de l’Avenir in 2010, and getting a Michelin Star in 2011 (a Star that he took back in the Michelin Guide in 2017) and his two Repsol Suns (Soles Repsol)... he became Joël Robuchon's advisor in 2015 for one of his laboratories in Paris, and his research was developed in Asia!

Despite the fact that Rodrigo de la Calle is well-known for being a vegetables lover, he states that he is not a vegetarian nor a vegan, althought he only uses meat and fish to season his dishes. Rodrigo de la Calle's creations are a perfect mixture of excellence, good taste, nutritious awareness and the respect towards nature.