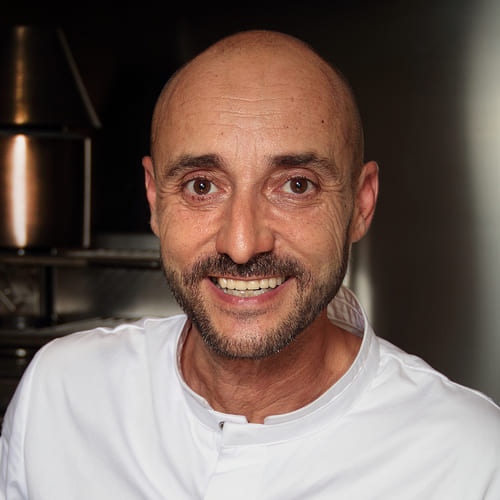 Kike Martí was born in Valencia, a city characterised for having one of our most outstanding dishes in the Spanish gastronomy, the Paella. According to the experts of this dish, it was originated in rural areas between the 15th and 16th centuries. It originated out of peasants' need to cook an easy, cheap dish with local products, such as vegetables, poultry and pulses. For such reason, Kike was self-taught and he started in this world just by chance, more precisely thanks to his younger brother.

His experience has allowed him to prepare more than 80.000 plates in the whole Mediterranean basin in the last years. With his presence in hotels and mainly in the best beach clubs, his know-how and good technique are now etched in the minds of their cooks and kitchen assistants. Kike belongs to the Spanish Professional Cooking Team as rice teacher, and he represents Spain in all events at a national and international level. Thanks to his participation in the aforesaid team, he was summoned as Rice Teacher of “El gourmet de La Roja” (Spanish Football Team) and is now permanently in it.

In 2018, Kike created the brand Arrózame, devoted to cooking training, events creations and rice selling, whose headquarters are in Palma de Mallorca, Bolivia and Malta.