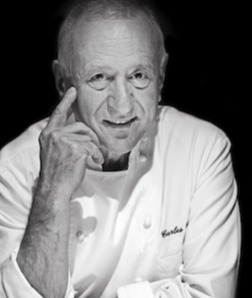 Carles Gaig is the 4th generation of cooks at a family restaurant founded as ‘Taberna de'n Gaig’, almost 150 years old. It is an authentic symbol of the neighborhood of Horta in Barcelona. This premises was renewed in 1989 with the strength of Carles Gaig and his eagerness to unify tradition and innovation to become ‘Restaurant Gaig’. Afterwards, in 2004, this restaurant moved to the core of the Catalan capital. Thanks to Carles' entrepreneurial spirit and his interest for high-quality cuisine, his restaurant has got a Michelin Star since 1993.

His passion for his stoves and his accurate gastronomic vision have made him undertake several successful projects beyond his family restaurant. One of them is restaurant ‘Porta Gaig’, at the airport of Barcelona, and he is also the head chef of restaurant ‘La Cúpula’ in Fuerteventura.

Gaig's cooking philosophy is accurate and perfectionist. Carles visits the Market of La Boquería (Mercado de la Boquería) in Barcelona every day in order to select and try the quality of his products in person. His goal is to give the world the best of his knowledge, based on the Catalan traditional cuisine inherited from his family. He wants to show delicious dishes that offer avant-garde and tradition, elaborated with the care of a teacher. Carles helps us enjoy his dishes, which sometimes seem to be old-fashioned but actually mean joy for our palate.