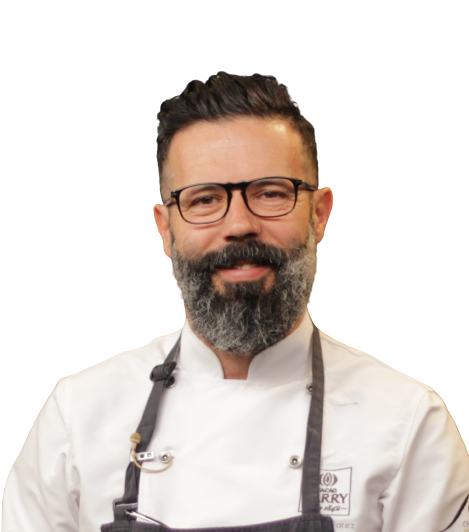 In this course, renowned chef, Daniel Álvarez, shares his expertise in baking and pastry to enable you to make spectacular pastry creations with flavors and textures worthy of haute patisserie. With this course you will learn how to make high-quality doughs, and how to ferment, laminate, shape, and bake pastries like a pro. Benefit from Daniel’s knowledge and discover the techniques for making classic pastry creations.

Working with fermented doughs to achieve gourmet pastries requires both skill and experience. In this online course, chef Daniel Álvarez teaches you all the factors to take into account when preparing different types of sweet and savory doughs (brioche, croissant, puff pastry, and ensaimada) and how to use them to create derivative pastries of the highest quality.

In this online course you will learn essential theory about ingredients, including flours, yeasts, and types of butter. You will see how to correctly knead, laminate, and bake fermented doughs.

Daniel Álvarez will teach you how to make sweet and savory pastries using different doughs (brioche, croissant, puff pastry, and ensaimada) from start to finish. You will discover specific products, like the Bostock, and exclusive preparations, like inverted puff pastry, which is a variation of puff pastry that results in a unique flavor experience. Expert chef Daniel Álvarez will explain everything you need to know about the importance of fillings, as well as give you the recipes for making them.

This course is aimed at both professionals and foodies who want to master all the elements of working with fermented dough to create pastries with outstanding textures and flavors.

In the bakery, there’s a corner where the treats for those with a sweet tooth are hidden: the pastries. These types of preparations aren’t usually associated with haute cuisine, however, everything changes when the person creating these delicacies is master pastry chef and chocolatier, Daniel Álvarez.

Daniel Álvarez is undoubtedly a master of pastries, due to the ingredients he works with, which are of the highest quality, as well as the techniques he uses, which he complements with originality, tradition, creativity, avant-garde and a delicate touch. All these elements describe the work of Daniel Álvarez, and like all creators, he is associated with a masterpiece. In his case, the chocolate panettone, the candied orange peel, the inverted puff pastry millefeuille, and his croissant. Throughout his career he has worked with great pastry chefs from across Spain and Europe such as: Ramón Morató, Pierre Hermé, Frederic Bau, Bellouet Conseil, etc.

The chef, pastry chef and chocolatier is a fourth generation pastry chef from Murcia. It was his father and his uncle who started the family business, a pastry shop called “Los Murcianos”. In 1985, his mother opened DALUA in Elche (Alicante, Spain), an avant-garde pastry shop of quality. The popularity of DALUA grew rapidly due to the quality of the products that can be found there, such as pastries, chocolates, cakes, etc. It should be noted how they produce one of the star products at DALUA: the inverted puff pastry millefeuille. It could be classified as a JIT type of production (just in time) because only a small number are made and they are assembled close to the moment of purchase in order to maintain the highest quality, which is an essential requirement when we talk about haute cuisine. Today the DALUA pastry shop is recognized among the best in Spain, and the world.

Daniel Álvarez is recognized throughout the pastry world. He was classified in 4th place at "Les Croquembouches" in Paris (1998), and was runner-up at the Spanish Pastry Masters (1999 and 2000). He won the Gold Medal at the Euro-American Pastry Championship (2000 and 2001), he was a member of the "Coppa dell Mondo della Gelateria" team in 2005 and 2007, and is currently a teacher at the Chocolate Academy in Spain and Mexico, in addition to collaborating with various gastronomic magazines. Since 2016, he has been a member of the exclusive worldwide association, Relais Desserts, and is an ambassador for Cacao Barry.

To publicize his work, pastry chef Daniel Álvarez released his book "Sweet Devotion", which is a current vision of artisan pastries where he shares the experience he has acquired during more than 30 years within the trade, offering tricks and tips, and also a special focus upon how to obtain a superb result with each preparation. It’s an essential manual for those who want to perfect, or start, their career in the sweet world, and a second edition has already been published.

In 2019, Daniel was also a judge on one of the first Bake Off pastry talent television shows, along with Miquel Guarro and Betina Montagne.

I really like this course and the instructor is excellent!

I really like this course and the instructor is excellent!

i learn the basics and the proper way of treating dough. Best lesson.

i learn the basics and the proper way of treating dough. Best lesson.

I really enjoyed this course. I am a home baker and was and still kinda intimated by the process of pastry making. I am glad some of the steps were shown, if...

I really enjoyed this course. I am a home baker and was and still kinda intimated by the process of pastry making. I am glad some of the steps were shown, if you don't have all of rhe fancy equipment. I will attempt some of the items as I feel alot more comfortable. I love how everything was explained. Now, that I know the why in each process, I understand the necessity of it.